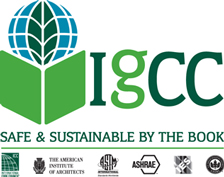 The International Code Council—America’s foremost building code writing body—has released the International Green Construction Code™ (IGCC).  The IGCC will provides state and local governments with a “model code” to enforce energy usage and carbon footprint limits with regard to commercial buildings. The code is designed to minimize adverse impacts building construction and operations often have on the environment.  The release of the IGCC is a first step in a long process: States generally must authorize adoption of the IGCC in order for it to be utilized or enforced by local governments. That the IGCC is integrated with the other ICC codes that state and local governments already have in place, as well as the flexibility of local officials to customize IGCC provisions to a jurisdiction’s particular climate, should bode well for its implementation.

When drafting the IGCC, the ICC attempted to utilize consensus, and therefore reached out to different organizations for input. Among the cooperating partners were the American Institute of Architects (AIA), ASTM International, ASHRAE, U.S. Green Building Council (USGBC), and Illuminating Engineering Society (IES).
The IGCC is the first model code that includes sustainability measures for the entire construction project and its site. The code seeks to provide green solutions for every part of construction, starting with the design phase all the way through the certificate of occupancy. According to the ICC’s website, “The new code is expected to make buildings more efficient, reduce waste, and have a positive impact on health, safety and community welfare.”

So what does the IGCC provide?

Baseline Green RequirementsThe IgCC creates a regulatory framework for new and existing buildings, establishing minimum green requirements for buildings and complementing voluntary rating systems which may extend beyond the customizable baseline of the IgCC. The code acts as an overlay to the existing set of International Codes, including provisions of the International Energy Conservation Code and ICC-700, the National Green Building Standard, and incorporates ASHRAE Standard 189.1 as an alternate path to compliance.