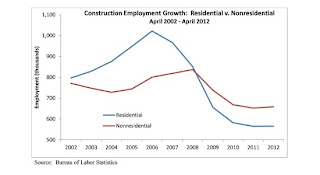 In general, construction employment numbers are up 1.1%, or 63,000 jobs, when compared year over year. Unemployment dropped a staggering 3% in the construction industry, from 17.2 percent in March to 14.5 percent in April, but this could be attributable to construction workers dropping out of the labor market altogether, or finding another career.