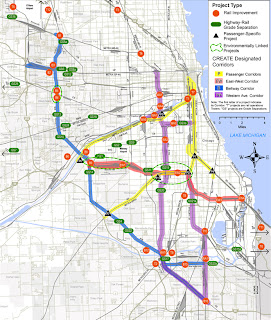 Want to transport your goods the slowest way possible? Try sending them via train through Chicago, where for more than a decade trains have gone so slow that they average speeds of less than 5 miles per hour. Because of the bottleneck that the transportation of goods has experienced in the Chicago – the nation’s largest commercial train transit pass through – Federal, State, local and industry offices are working on a plan to create a more efficient rail system in Chicago. The hope is that when the project is completed, the speed at which trains travel through the Chicago area will significantly increase, and the backup of cargo trains waiting outside Chicago to make it to the other side will significantly decrease.

The first stages of the Project are nearing completion, with fourteen of the 70 projects have been completed so far, and 12 more are under way.  With a budget of approximately $3.2 billion, the Project, which is termed the “Chicago Region Environmental and Transportation Efficiency Program“, or “Create,” is meant to resolve years of problems with delays in the commuter rail system, including Amtrak, as well as the commercial rail system. The goals of create are to:
In meeting these goals, the program design anticipates replacing 25 rail intersections with overpasses and underpasses that are designed to speed up the 1,300 freight and passenger trains that pass through the city every day.  The plans also look to separate tracks that the freight and passenger trains currently share, so that there are no crossover delays such as those being experienced now.
For a full complement of maps and other information on Create, you can view them at the Create Website.